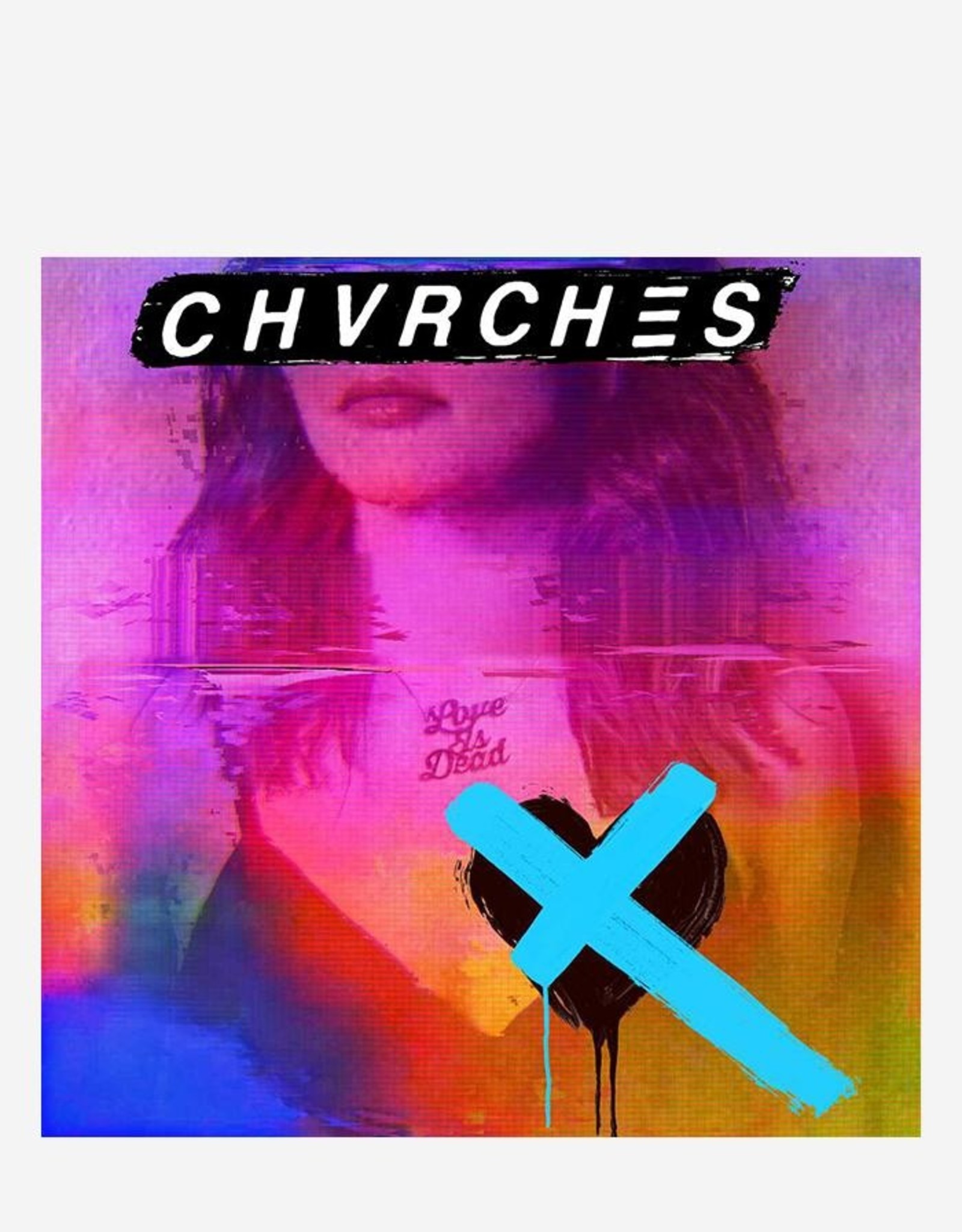 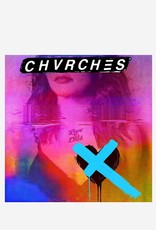 Since emerging in 2013 with the glistening brightness of their breakthrough single, “Recover,” CHVRCHES (Lauren Mayberry, Iain Cook, and Martin Doherty) have always projected an insularity, a subtle but unmistakable wariness about leaning into their obvious Hit-Song-of-the-Summer-writing potential. At their core, CHVRCHES are true blue Glaswegian punks. They’ve wanted to protect themselves, and protect that undercurrent of melancholy that gives depth to their sunniness.

To this end, the band members have always kept their creative process close and tight. They’ve been diligent to the max about managing the way their band is portrayed. And, of course, they have historically produced every piece of music themselves, including their 2013 debut, The Bones of What You Believe, and 2015 follow-up, Every Open Eye. “Certainly not,” was their go-to response, Martin recalls laughing, when asked to consider collaboration. “We knew that if you get led down the wrong path it can completely derail your career.” But if there’s a theme in CHVRCHES’ world as they prepare to release their third record, Love Is Dead, it’s willful, determined openness, both ideologically – more on that in a minute – and in terms of actual creative process.

This time around, instead of Lauren disappearing for days at a time, the trio stayed in the same room even while Lauren was writing lyrics. As a result, the album “feels a lot more coherent,” she says. Lauren also consciously pulled from a different psychic well when writing those lyrics, one that’s less introspective and more expansive and imagistic. “I tried to write less about romantic love specifically,” she says. “And more about the overarching concept of love.” And, for the first time ever, CHVRCHES opened their proverbial doors to outside influence. The Eurythmics’ Dave Stewart served as the band’s de facto mentor, providing insight Lauren says “really pushed us to focus on the artistic integrity of the album and everything that surrounds it.” Steve Mac co-produced the soaring ode to hope, “Miracle.” And thanks to some extremely productive time spent in what Lauren calls his “Aladdin’s Cave,” Greg Kurstin (Adele, Sia) wound up co-producing eight of the record’s twelve tracks. “We had similar musical tastes and we clicked in the writing process pretty quickly,” Kurstin recalls. “I got to pull out all of the things I don’t have a chance to normally use.”

The result is the purest ever distillation of CHVRCHES’ signature pretty gloom. “It makes more sense than anything else we’ve made because it most accurately represents us,” says Martin. “We’ve always had this super difficult side to us – artistic and introspective and angry, but then we also fully embrace commercial music,” he continues. “When we talked about this album, before we even made it, we talked about it that way, we talked about there being two sides to the band. With Love Is Dead, we’ve broadened the appeal, but there are moments that are more difficult than anything we’ve ever done.”

This conscious move towards openness in the creative process reflects a bigger, deeper existential theme as well. “We live in a time where the death of empathy is pretty evident,” Lauren explains. “You turn on the news and see story after story about how selfish and unkind people are, but also stories of strength and resilience and resistance. How do we deal with both those things?” That question, of how to honor our justifiable despair about the state of the world, while moving towards hope and love, mirrors CHVRCHES’ sonic blend of dualities. As Lauren exhorts in “ii”, the instrumental / spoken word intro to album closer “Wonderland”:

Truth exists somewhere between the dark and the light.

It’s that quest for balance that runs throughout Love Is Dead.

Lead single “Get Out” is a sprawling crescendo of heartbroken joy, and the album’s opening track, “Graffiti,” with it’s lilting syncopated backbeat follows suit. “Wrote our names along the bathroom walls, graffiti-ing our hearts across the stalls,” Lauren sings. “I’ve been waiting for my whole life to grow old and now we never will.” The song captures a sense of perspective on the passage of time. “Growing up and realizing things aren’t going to be the way you thought they would be,” the singer explains. “The feeling of Stand By Me, ‘I never had any friends later on like the ones I had when I was 12. Jesus, did you?’”

Then there’s the slinky “Deliverance,” which personifies that classic CHVRCHES blend of punk ethos with a pure pop sound. “You don’t hear people singing on the radio about the hypocrisy of religion,” says Iain, “but that’s what’s exciting about it. We were thinking about Like a Prayer era Madonna, and Nick Cave, and Depeche Mode’s Songs of Faith and Devotion.”

The band doesn’t consider their music expressly political, per se, but the urgent, brightly haunted “Graves,” with lyrics like “they’re leaving bodies in stairwells and washing up on the shore/you can look away while they’re dancing on our graves/if you don’t have a heart I can offer you mine,” feels abject and despairing yet joyful in a decidedly topical way. And on, “Miracle,” Mayberry questions “I feel like but I’m falling but I’m trying to fly, where does all the good go?”

Speaking of politics, the dreamy “Heaven/Hell,” with lyrics like, “Ais right if I’m a perfect actress/Playing the princess in distress?/Is it alright if I save myself and/If I clean up my own mess?/Is it enough yet, ‘cause I’ve had enough?” gets at an issue CHVRCHES have been dealing with since their very first Twitter follower: what it’s like to be a rock band with a female frontperson. From the jump, Lauren has been outspoken about the vitriolic sexism and misogyny she was expected to tolerate merely because she’s a female human being singing on a stage. Hers is a perspective that has found much greater support in this last year, which is great, obviously. “I think it’s healthy that it’s in the mainstream,” Martin says, “of course, but she was getting fucking slaughtered five years ago, for saying stuff that’s now everywhere I look. Lauren stood up against this kind of behavior on day one.”

And she paid a price. Unlike her bandmates, who, by the time CHVRCHES formed, had already logged a lot of years in other groups, Lauren’s entrée to the rock and roll life was more trial by fire. “I was 23 when I met Iain, 24 when we started this band and I’m thirty now,” she recalls. “I’ve had to grow up in front of people.” From the very beginning, “there was a lot of trepidation on my part,” she recalls. “As a woman in any industry but especially as a woman in the entertainment industry, I knew how people talk about you. How they perceive you. Even before the first record came out I could see all these monsters in the trees already. Some of those monsters turned out to be real. Some of them did not.”

That’s a lot of what Love Is Dead is about: growing up, “coming to terms with the fact that there are great things in the world and there are awful things in the world and that you can’t get one without the other,” Lauren says. It’s that duality, again. “We’re fucked, the world is fucked,” Iain summarizes, with a smile. “But there’s an ellipses at the end. It’s Love Is Dead…. Like, how did we get to this point? And how do we move on from this point? It’s Love Is Dead, we’re fucked, what’s next?”